I have a few sewn things that I finished over the last few weeks.  I haven’t posted about them yet, but will do them all now.

First, I made a pair of jeans!  I have been planning to make jeans for about a year, when last May I decided to try it.  I bought a Craftsy course by Angela Wolf (after hearing a podcast interview with her) about how to make jeans.  I bought her pattern sometime around Christmas, as well as the denim she recommended.  Finally, in March I started tracing and cutting out the pattern, then making a muslin.  The first muslin I made, I was having to make so many adjustments that I realized that if I made the jeans 2 sizes smaller, I would have fewer problems.  So, with a smaller size, and only a few adjustments, the muslin fit pretty well.  Then, I started on the jeans in denim.  They were much easier than I thought they would be – and actually a lot of fun.  A bit of a puzzle with lots of room for artistry (not that I could put much art in mine at this point).  The top stitching was fun and a good practice.  I used two spools of thread, twisted, to make the thread thick enough – and increased tension a bit.  Next time, I will use a top stitching thread.  I forgot to use stabilizer when I was top stitching the pockets, so they don’t look as good as they should.  I also was not totally pleased with the fabric.  It was too thin and too stretchy.  It has 3% Lycra, I think.  Next time I will choose a thicker denim with a little less Lycra (and I may have found that fabric at a local fabric store).  Also, the pocket linings did not go far enough down to look right.  The lining sticks out a bit.  Anyway, despite these problems, the jeans fit and they are very comfortable.  I used two buttons from my grandmother’s collection on these. 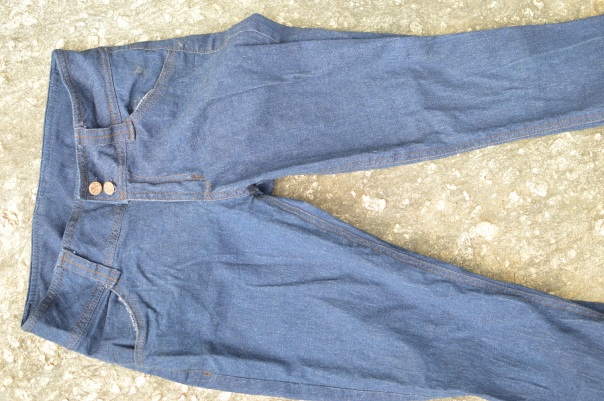 Next, I made Evva a sweatshirt that matches (or goes with) the one I made for Anne a few months ago (I must not have posted it – her’s is black French terry with the mustangs in teal and off-white) – mustangs with an organic cotton knit fabric.  Oliver + S pattern.  You can’t see it in the pictures, but there is a front pocket that is a neat detail.  Evva loves it.

Finally, I made shorts for each of the girls and myself.  I love this pattern from Purlbee.  It is easy and the shorts are cute and comfortable.  Also, I used a bias tape maker I got from Purl Soho which makes bias tape making SO MUCH easier.  I love it!