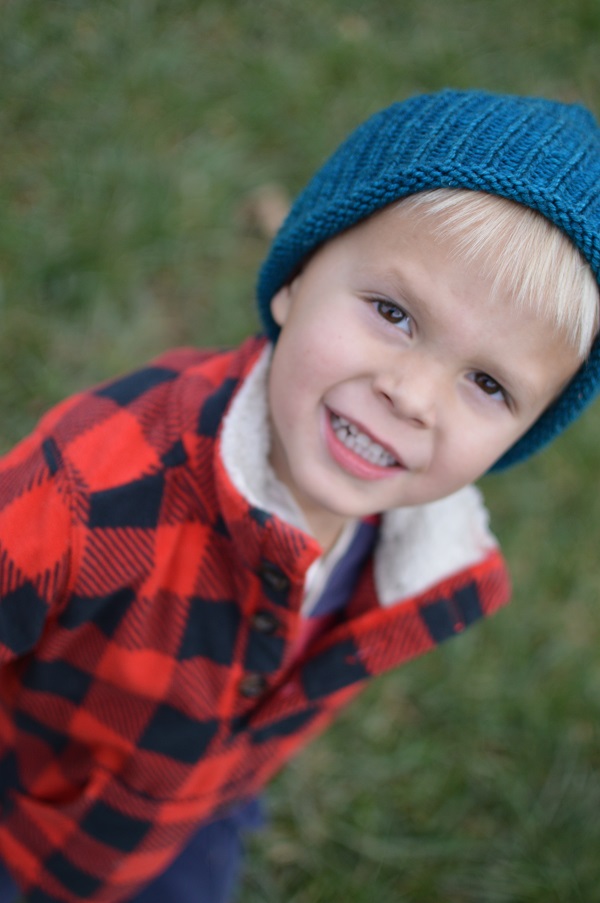 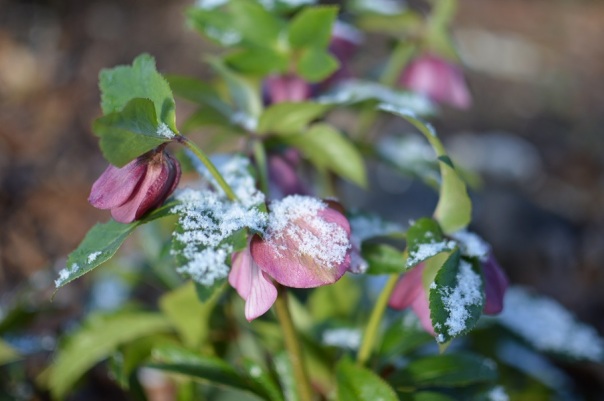 Winter weather has descended upon us.  It is cold.  Wind chill below 0, bone-chilling, a bit refreshing (for the first minute outside) – cold.  I don’t completely understand how weather works and why some days that are 20 degrees (F) out feel just fine, and other 20 degree days feel like the North Pole and the cold goes right into your bones no matter how well dressed you are.  I could say the same about 60 degree days – some feel like summer, some feel like winter.  Is it humidity, wind, sun that makes the difference?  Whatever the reason, we are in the cold temps that feel COLD.  We had a dusting of snow the other day, and it looked pretty on the lenten roses (which bloomed about a month early because of the crazy warm December), but now the cold has really depressed (the only word I can think of) these flowers.  They are all laying in a lump on the ground, frozen.

Which means that there are shorter periods of being outside, long periods of getting dressed to go outside (finding hats, mittens, socks and shoes), and longer periods of playing inside.  Yesterday, a holiday, we all spent at home.  A few friends came over to play, and all 6 children played together (for the most part) inside, with multiple ventures outside.  Retreating, when too cold back to the house to have hot chocolate and snacks, to read, and to play.   William and I spent nearly the whole day cleaning and organizing our house.  A task that is overdue, but seems impossible to get done since we are often busy and don’t build in time to do it.  I think I also tend to avoid it, having things I would much rather do.  It is also frustrating to try and tackle a large task like this to be interrupted by the need to make snacks, or drive the carpool, or get to a meeting.  But, yesterday was the perfect day for it – a holiday, children entertained and taking care of each other, a partner to support the effort, no work or carpool. 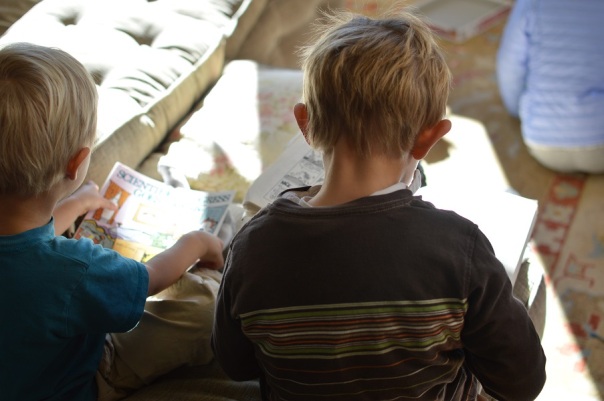 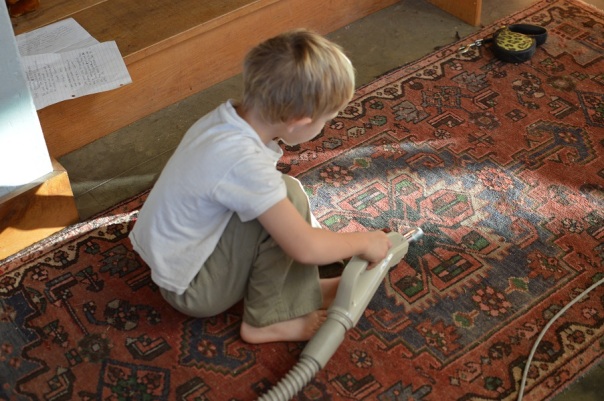 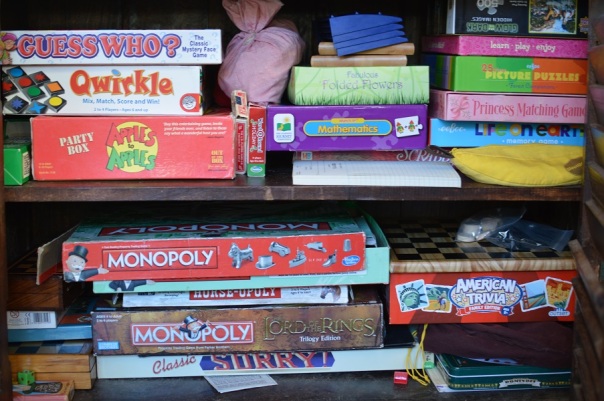 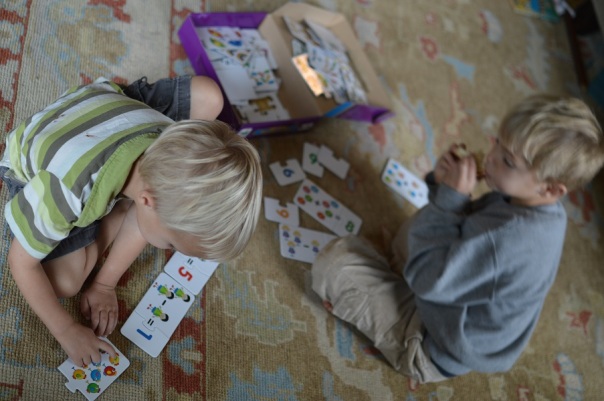 First, I tried to organize my sewing patterns.  I had bought large 3 ring binders and sheet protectors to store and organize the patterns, but just over half way through the process, realized I did not have enough binders or sheet protectors (which means I have over 100 patterns).  But, I found a temporary solution.

William cleaned and organized our bedroom which has been a bit of a disaster since Christmas.

I organized the game cabinet as well as the toy cabinet, both of which are getting quite a bit of use in the cold weather, and it is satisfying to see everything made neat and useful (for now at least).  Surely by the end of the season, they will be a bit of a mess again.

Tidying up like this also makes me wonder if should get the book “The Life Changing Magic of Tidying Up”.  It seems like it might be written for me.  Perhaps the library has a copy, because I don’t have a lot of faith that I will follow through will changes that take a lot of time or effort, so I don’t want to spend the money on it until I read a bit of it.  We’ll see.

Finally, I made a batch of homemade nutella – or cholocate hazelnut spread – for the week.  This is a treat I make occasionally, and it is so good, better (in my opinion) and healthier than the store bought kind.  This recipe is based off of Susan Herrmann Loomis‘s recipe in her cookbook Nuts in the Kitchen.  Susan’s a distant cousin, too.  The kids love it and it is simple to make.

1/4 cup unsweetened cocoa powder (you can use a fancy, expensive kind, or Hershey’s – I can’t tell much difference)

Toast hazelnuts in the oven at 350F for about 10 minutes.  They smell slightly toasted and are turning a little browner.  Take them out and put the nuts on a kitchen towel (not a terry towel) and rub them with the towel to rub off the skins.  After the nuts cool, I usually rub them with my hands to remove most of the remaining skins.  Some nuts will  hang on to their skin and that is ok.  Try to separate the nuts from the flaked off skins and throw the skins away (or compost them).  When the nuts are cool, process them in a food processor until they are a smooth paste.  This will take several minutes.  It will go from a paste to a smooth paste after a while, but it will never be as smooth as store bought. Again, that’s ok.  Add the salt, sugar, and cocoa powder and process till mixed well.  Now you are done.  Scrape it out and put in in a jar.  I use a mason jar (fits perfect in a pint-size).  It probably should be stored in the refrigerator, but ours goes fast enough that I keep it on the counter. 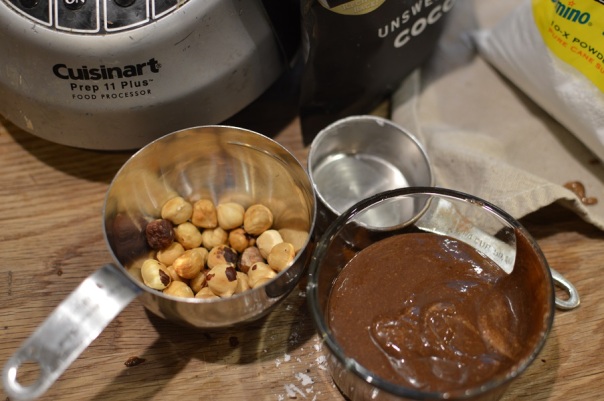 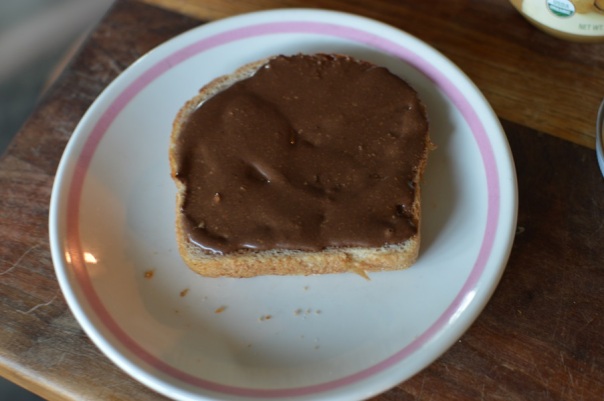 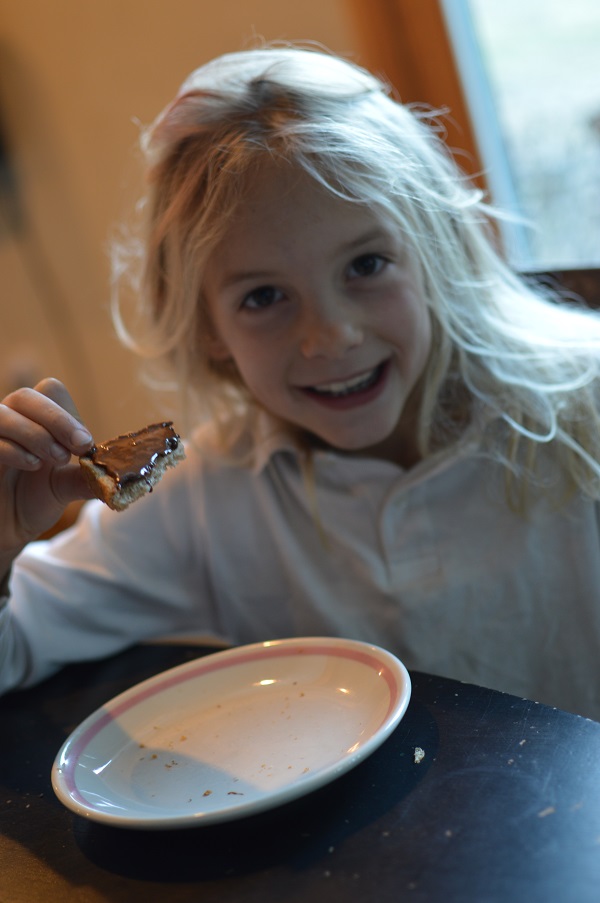